Beer League Hockey without the Beer

Canlan sites government rules about drinking in public, so technically they have the law on their side. But what about hockey tradition?

The Deep Cove, BC Beer League hockey team, DC Devils recently appeared on CBC's The National. Here the link to the video:

http://www.cbc.ca/player/News/TV+Shows/The+National/Only+in+Canada/ID/2384106084/ Does this mean no more cold ones after the game? In the words of Devils goalie Andrew MacDonald,


"We'll just have to be more creative."

Puck Gamer has a cool post on the Top 5 Favorite Hockey Video Games of All-Time. These games might not satisfy your appetite for Call of Duty MW2, but they may just take you down retro lane for a few minutes. Here are Puck Gamers picks:

1. NHL 96 – Sega Genesis
The original NHL Hockey changed hockey videogaming, but it was the 96 edition that is my #1 hockey game of all-time. I loved being able to play multiple seasons, make trades as well as create my own players. None of the previous versions of the game had the create-a-player feature. I ended up playing over 1000 games (I kept track of stats in a notebook) and went through 3 cartridges. The gameplay and the graphics were advanced (at the time) and the animations was sufficient enough to make each game feel different.

2. Hit the Ice – Arcade
My cousin and I must have pumped $100 into this game in a 24-hour period one summer. The ability to play 2-2 with up to 4 players made this a great game to play in the arcade. We’d play on teh same team and take on the CPU or anybody you dared play us. The graphics were great (for 1991) and the gameplay was smooth. The abilty to choose players that had distinct abilities gave the game some extra enjoyment. The power-ups were a bit over the top, but for an arcade game they added an element of strategy. The nostalgia of playing with my cousin gives Hit the Ice a higher rank. The home versions of the game were horrid.

3. NHL 12 – Xbox 360
The latest generation of hockey games keeps getting better and better. NHL 12, reviewed here, is the best in the current series, but will probably be surpassed by NHL 13. The online and offline modes are excellent and I’m looking forward to the advancements in NHL 13.

4. SuperStar Ice Hockey – Commodore 64
The Commodore 64 wasn’t known for sports gaming, but this game took up quite a bit of my time during high school. SuperStar Ice Hockey allowed gamers to create a team and be the GM for multiple seasons. Players could be traded, created, drafted and released. Players also got better and worse as they aged. The gameplay was so-so, but at the time the GM features made this game seem incredibly advanced.

5. Activision Ice Hockey – Atari
I can still remember playing this game for hours until my mom made me go outside. I got Activision Ice Hockey for Christmas one year and played it nearly everyday for the next 2 years. Even though it was 2-2, it was still hockey and the 1st game to move past the pong-style of hockey gameplay (Intellivison Hockey was a bit more advanced, but I didn’t have that system). I still have my Activision All-Star Ice Hockey patch.
Posted by Richard Neuman at 8:48 PM 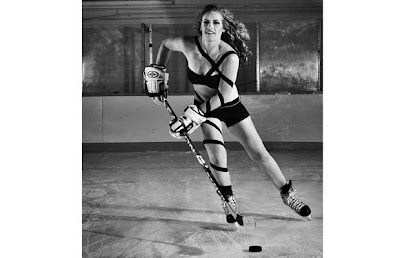 Rec hockey’s calendar girls are at it again, this time updating their concept with classic hockey shots for 2013 — all in the name of charity fundraising.

The Ice-O-Topes, a women's ice hockey team based out of Vancouver, have released their annual pin-up calendar. This year it’s with a twist. Partial proceeds from each $20 calendar go to the Britannia Ice Rink in east Vancouver.

The rink runs the BASH program (Britannia After School Hockey) which provides underprivileged teens in East Vancouver an opportunity to get into skates and learn the game. BASH is also accepting donations of gently used hockey gear.

Donations can be dropped off during rink hours at 1661 Napier St., Vancouver, B.C.
Posted by Richard Neuman at 8:35 PM

Hockey Lockout Not Over Yet 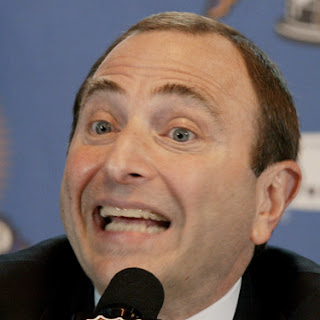 With the NHL bleeding $20 million (all figures U.S.) a day, it is the collapsing business backdrop that may well have led to the urgency behind talks in New York aimed at ending the lockout.
Both sides remained tight-lipped about what was exchanged — both were mulling over ideas presented by the other — as the optimism of Tuesday turned into a hard slog on Wednesday.
And the hockey world waited for the season to be saved.
“I’m trying to stay even-keeled until the deal is signed, sealed and delivered,” Maple Leafs forward James van Riemsdyk told the Star.
If Tuesday was about ideas and hope, Wednesday was about trying to put ideas onto paper and hope into action.
Players met directly with owners for the second straight day and frequently recessed as both sides met with their leaders — Donald Fehr and Gary Bettman — who were not allowed inside the negotiating room.
Posted by Richard Neuman at 8:26 PM